Good morning and happy Monday! Spring football is now officially underway for most of the FBS squads, with another slate of teams starting practices on Saturday. That means we’re getting closer to spring games, which means college football on TV!

Between now and then, though, we still have some Pro Days to get through and some NFL Draft buildup stories. Let’s take a look around the country at some of today’s top stories.

Could USC actually leave the Pac-12 for the Big 12? That’s been a topic of debate recently. 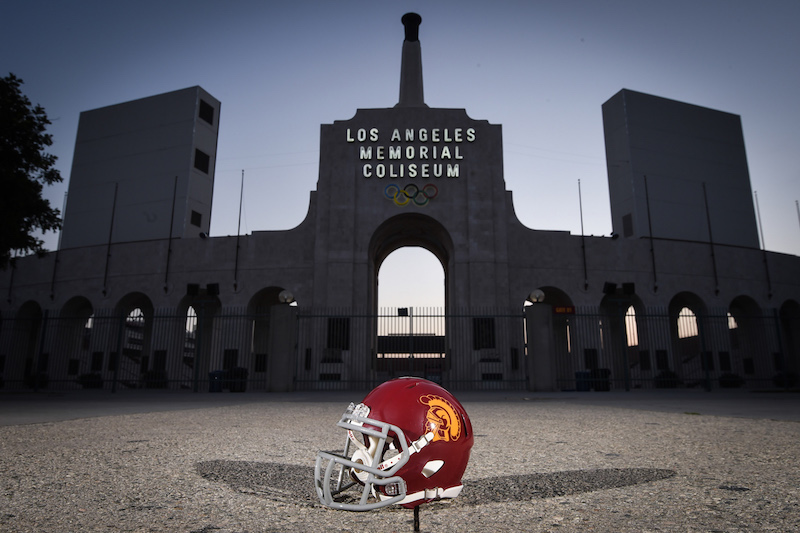 The Pac-12 has been going through a few rough years on the football field, as the past three College Football Playoffs have taken place without any Pac-12 squads participating. Add in a less-than-ideal media network situation at the moment, and it’s no surprise some buzz has started about teams potentially leaving the conference.

In recent weeks, there have been some rumors circulating about USC potentially leaving the Pac-12 for the Big 12. Where did those rumors get started? Let’s take a look at this interesting story:

Obviously, nothing is imminent at the moment. This seems mostly about certain teams sending a message to the Pac-12. We’ll see how this situation progresses as the 2020 season quickly approaches.

The 2020 college football season is still a few months away, but spring practices are under way for a number of FBS schools. While most programs will hold their spring games in April, there are a few schools that will be hosting their annual spring scrimmages this month.

Houston held its spring game this past Friday, and Air Force went on Saturday. As the month progresses, 10 additional schools will hold their spring games. Here’s a look at when those games will take place over the next couple of weeks (via FBSchedules.com):

April is going to be jam-packed with spring games every weekend, but these 10 games will be a nice appetizer before we hit that point.

Trevor Lawrence is the likely No. 1 overall pick in 2021. Are teams already trying to tank for him? 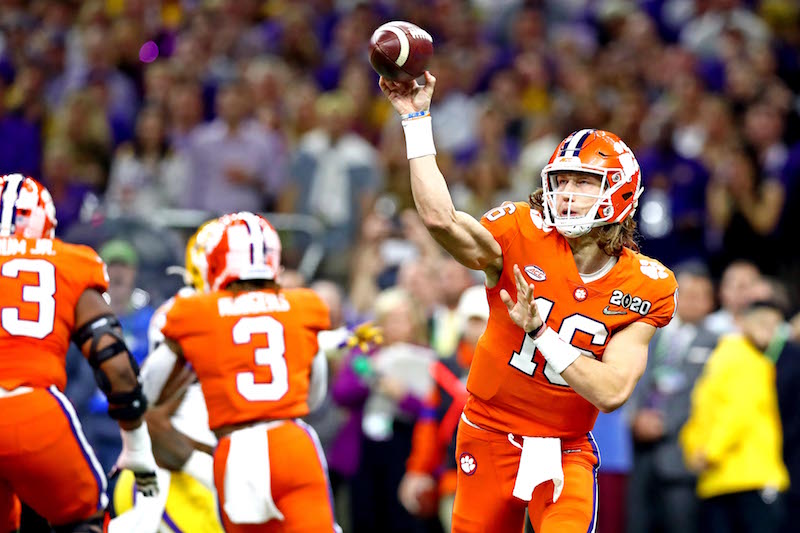 The 2020 NFL Draft is still a few weeks away, but there has already been some speculation about the potential No. 1 overall pick in 2021. Clemson QB Trevor Lawrence is expected to be the prize prospect in the next draft class, and for good reason.

So, are any NFL teams already angling to draft Lawrence next April? Let’s take a look at some “Tank for Trevor” stories that are popping up:

The Miami Dolphins were expected to try to “Tank for Tua” this past season, but they got hot later in the season and finished 5-11. However, they are still in the mix to land Tua Tagovailoa with the No. 5 overall pick in the 2020 NFL Draft. We’ll see which teams put themselves in position to draft the Clemson star this time next year.

Today, let’s see how well you know FBS coaches. We’ll give you five coaches and five schools and you have to match the coach with the school he currently works for. Ready? Here we go:

Joe Burrow has gotten several NFL comparisons. Which ones best fit the likely No. 1 pick? 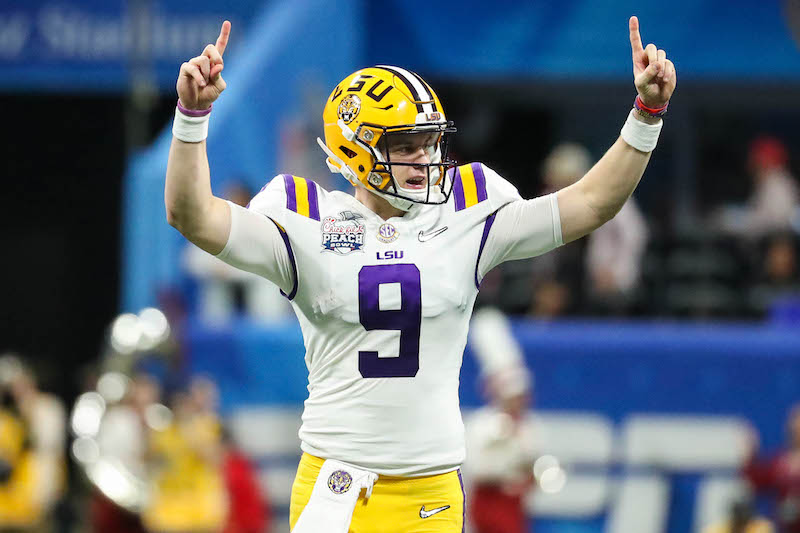 At this point, it seems like a lock that former LSU QB Joe Burrow is going to be taken by the Cincinnati Bengals with the No. 1 overall pick in the 2020 NFL Draft. What isn’t as certain, though, is which NFL quarterback is the best comparison for the reigning Heisman Trophy winner.

So, who is Burrow being compared to? And, how do those pro comps hold up? Let’s take a look at some of the chatter surrounding the likely No. 1 pick:

NFL comparisons are never perfect, because every player is different. Still, if Burrow can live up to some of the comps he’s been getting in the pre-draft process, he should have one heck of a pro career.

Here are the answers to today’s school-coach matching game:


QUOTE OF THE DAY

“It is frustrating, I am frustrated not so much for us but I am frustrated for our guests who come out to see Joe. I’m frustrated for our partners, for our host at the event and our associated partners with what we do at the Maxwell Football Club – they’re excited to see Joe Burrow. And rightfully so. It’s sad that it has to happen. When you have 14 award winners, a lot of moving parts at the event and you hold your breath that you don’t have bad weather, you don’t have travel difficulties, that you don’t have something unfortunate happen in someone’s life that they can’t join us. Those things happen from time to time. I haven’t run across this type of decision making for a winner not to come and I really don’t know a viable explanation other than what we’ve been told.”

– Maxwell Football Club executive director Mark Wolpert wasn’t too pleased that Joe Burrow decided to skip the Maxwell Award ceremony over the weekend. Burrow was originally scheduled to attend and then his plans apparently changed. 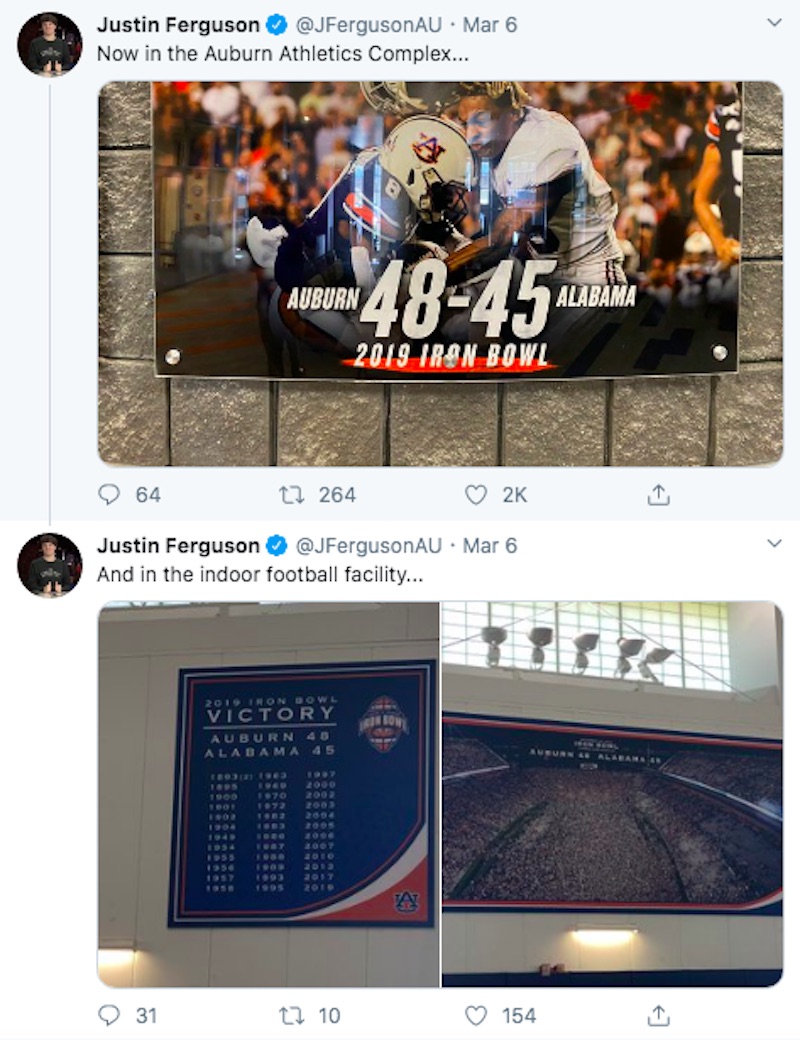 Auburn clearly wants everyone who visits its football facility to know the Tigers beat Alabama in the Iron Bowl last season.