SEC Quarterback Power Rankings, Week 3: Time for a change at the top

Three weeks into the college football season, one of the biggest stories so far in the SEC is the play of its freshman quarterbacks.

But it’s not just Eason, who arrived in Athens with five stars in his recruiting profile — not to mention crushing expectations — and a short path to the starting job. Alabama handed its offense over to Jalen Hurts and, if anything, looks even scarier. Brandon McIlwain is flashing here and there at South Carolina, too.

While mistakes will be made, these young signal callers are more prepared than ever to step in and play right away. From 7-on-7 football to the passer-friendliness of spread systems, learning curves are flattening.

Here are my SEC quarterback rankings following Week 3, which includes a change at the top for the first time.

Shurmur’s completion percentage has gone from 36.4 to 53.6 to 65.4 in three games, but even this past Saturday he only averaged 5.7 yards per attempt. This Vanderbilt offense has shown zero big-play ability vertically.

Even though the Yellow Jackets stacked the box to take away running back Ralph Webb, Shurmur couldn’t capitalize downfield.

Like Shurmur, White connected with receivers regularly in Week 3 (66.7 percent) but did so in dink-and-dunk fashion.

Whatever momentum be built up for himself the previous game against Arkansas State, White wasn’t able to carry it over in Auburn’s 29-16 home loss to Texas A&M. He was eventually pulled in favor of Franklin.

Franklin isn’t a gifted passer. The offense is restricted to read-option stuff with him in there. Two limited QBs don’t equal a good one.

Barker got the start for Kentucky against lowly New Mexico State, hitting on 1-of-2 passes with an INT before an injury.

Off the bench, Johnson put together a productive stat line: 17-of-22 for 310 yards with 3 TDs and no picks. That being said, the Aggies are arguably the worst program at the FBS level and presently 120th nationally in total defense. 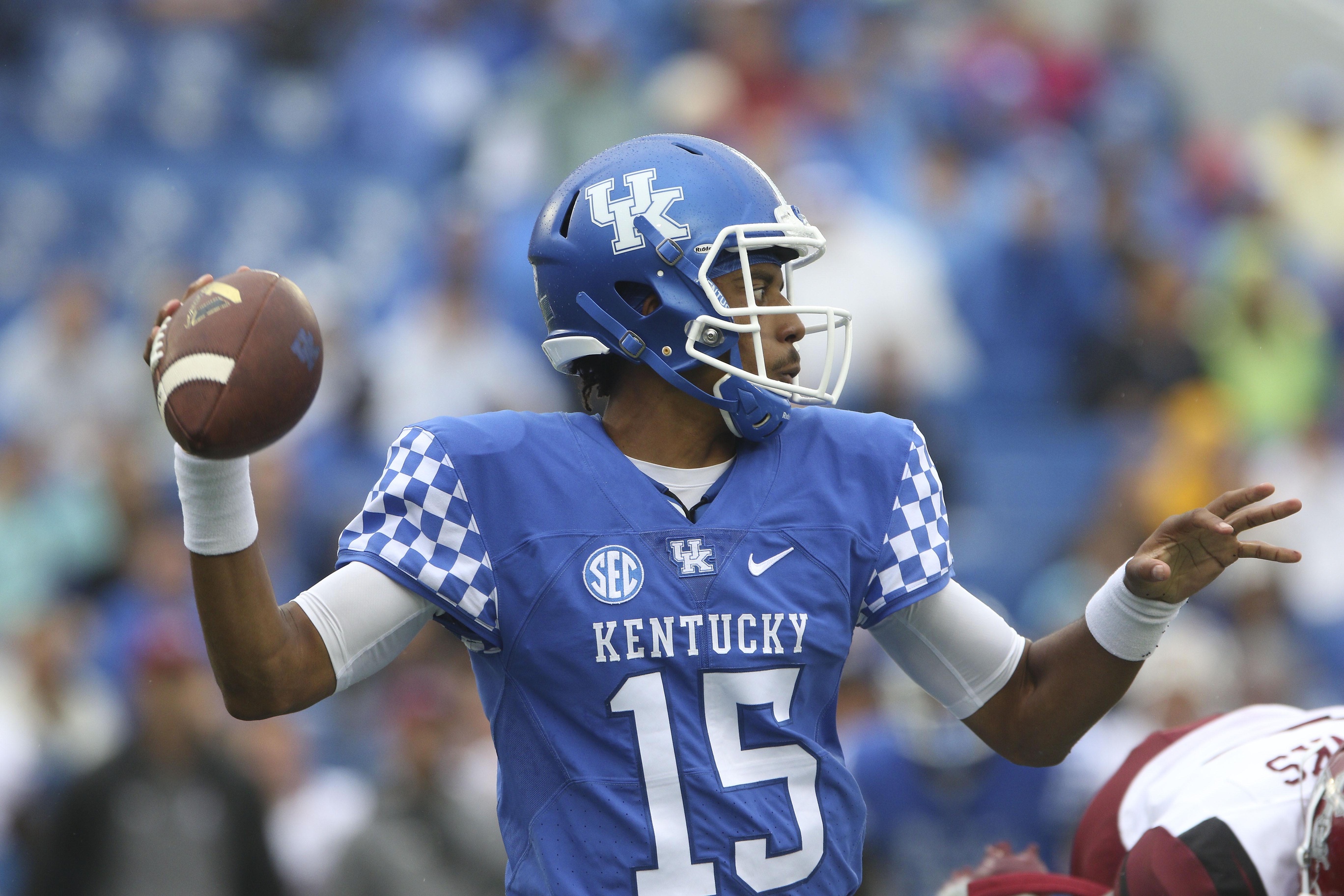 Remember, Barker looked fantastic for a half in the opener facing Southern Miss. Neither has done anything against a quality opponent, though.

Fitzgerald has resembled a yo-yo thus far for Mississippi State. He was brilliant once, but he has also gotten benched twice.

Week 3 was his second early exit, as the Bulldogs dropped a roadie at LSU. It only got interesting after coach Dan Mullen yanked Fitzgerald in favor of Williams, who hit on five of his first six passes with a score.

All those wide-open running lanes Fitzgerald saw in victory over South Carolina simply weren’t there in Death Valley.

Del Rio was working his way up the rankings quite nicely, but a knee injury vs. North Texas means a new starter for Florida.

After an up-and-down career at Purdue that saw him assemble an even touchdown-to-interception ratio of 19-to-19, Appleby will make his first career start Saturday for the Gators at Tennessee. What we’ll see is anyone’s guess.

Fortunately, this is a defense-first team that will likely frustrate the Vols. Appleby only has to make a play here and there.

Starting and finishing a game for the first time, McIlwain has finally taken over for the more experienced Perry Orth at South Carolina.

Throwing the ball, McIlwain was a mediocre 16-of-28 for 195 yards in beating East Carolina. While he didn’t find the end zone, he wasn’t picked off either. As a ball carrier, he added 34 yards on 9 attempts and crossed the goal line twice.

He doesn’t have the quarterbacking upside of an Eason or a Hurts, but McIlwain is a natural playmaker with the ball in his hands.

Etling threw the ball well early against Mississippi State, helping put together a 23-3 lead in the third quarter. However, thanks to some trademark conservative play-calling from the Tigers, he had to hold on late for a 23-20 win. 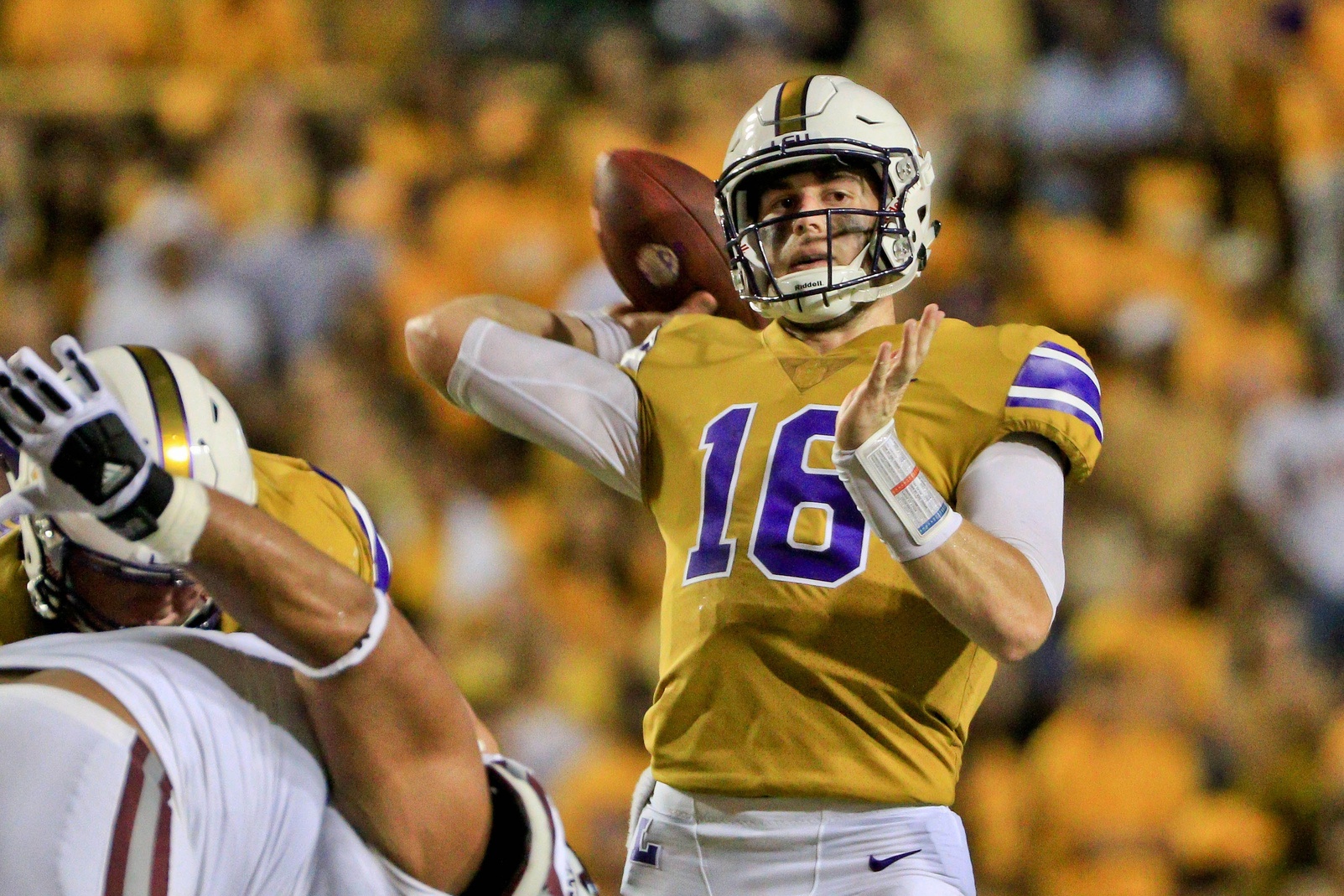 All Etling has to do is hand the ball off to Leonard Fournette and make the throws that Harris missed. So far, he’s doing that.

Lock has certainly put up gaudy numbers in three weeks, leading the conference with 368.7 yards per game through the air.

Yes, he threw 3 touchdown passes Saturday in a loss to Georgia, but he also fired 3 interceptions that perhaps took points off the scoreboard. He’s also only completing 55.6 percent of his throws to this point.

Steadily creeping up the rankings week after week, he needs to take better care of the football to truly make a breakthrough.

With Arkansas an unexpected 3-0 thus far, Allen deserves a lot of the credit for taking the baton so seamlessly from his older brother.

He wasn’t going to crack the Top 5 after facing Texas State, even with a nearly flawless 16-of-21 performance that produced 2 TDs and 0 INTs in a 42-3 blowout. Allen is yet to go up against an SEC defense.

Still, Hogs fans have to be thrilled with what they’ve seen so far from Allen. He has some underrated weapons helping him, too.

Dobbs is who he is at this point. Dropping dimes one drive but missing wildly the next, at least he’s running with purpose again.

Tennessee was in a 21-19 dogfight with Ohio in the fourth quarter before he delivered the final dagger, a 20-yard touchdown strike to Josh Malone. Aside from Malone, Dobbs isn’t getting a lot of help from his receiving threats.

If Dobbs can’t beat Florida in Week 4 and end that 11-game losing streak in the series, he could be in for a tumble down the list.

As referenced above, Eason got a W for Georgia in the closing seconds with a clutch pass down the seam to Isaiah McKenzie.

Like the aforementioned McIlwain, not only did Eason get the start at Missouri, but he went wire to wire for the first time. While the game plan didn’t call for him to throw 55 passes, that’s what it took to win. 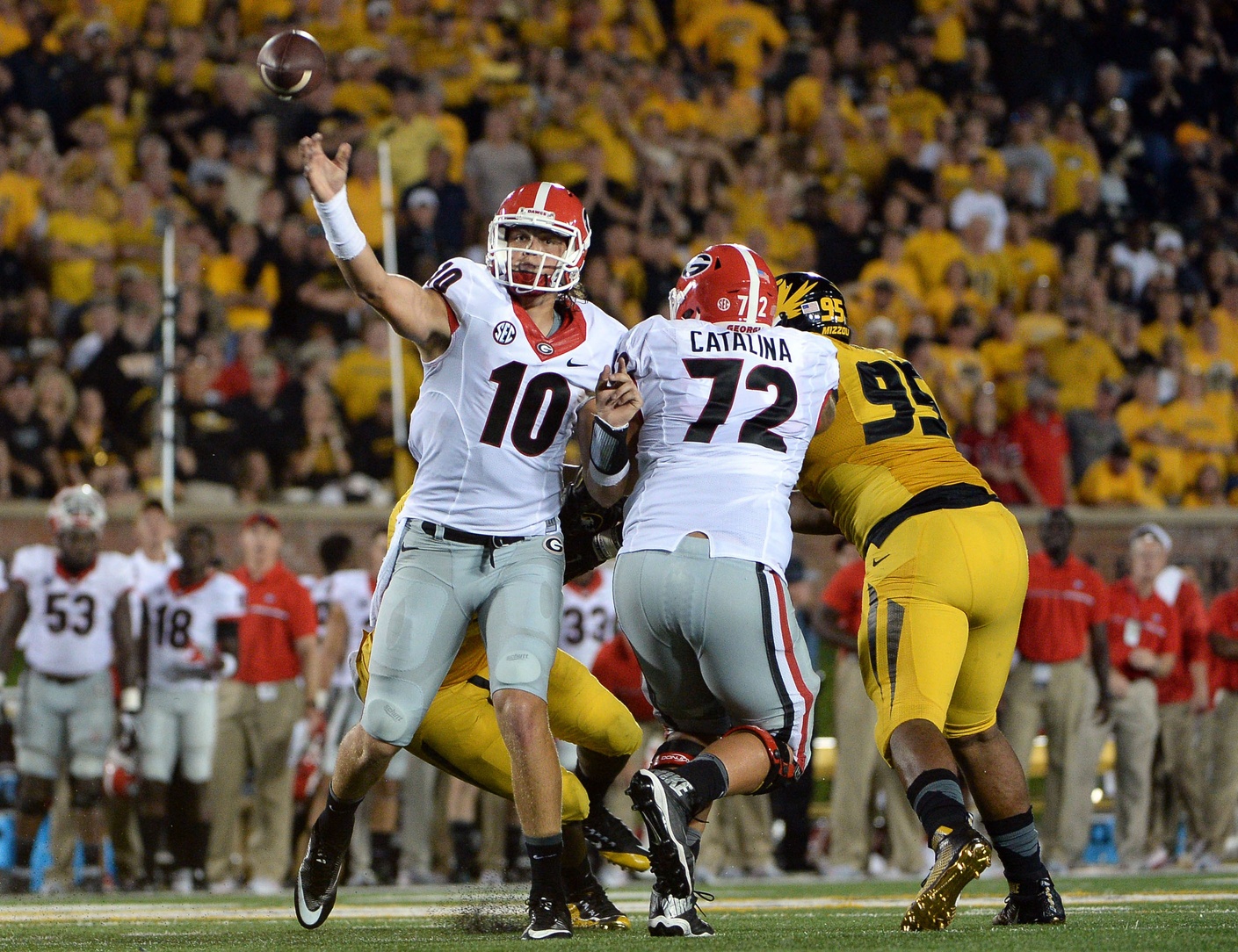 He’s thrown a couple of picks and holds on to the ball too long in the pocket, but Eason has become really good really fast.

I guess three games is what it takes in the SEC for coaches to let it fly for four quarters with a freshman under center.

No longer curiously rotating with Blake Barnett, Hurts went the distance at Ole Miss and emerged with a 48-43 comeback victory. He wasn’t overly productive throwing the ball, but his 146 yards rushing were critical.

Sure, Hurts got a lot of help from his defense and special teams. Nevertheless, Alabama is terrifying with a quarterback like this.

Dropping out of the top spot for the first time this season, Kelly has helped blow a big lead to a national power twice in three weeks.

When Kelly is hot, he possesses an electrifying arm and can score points in bunches. But when he cools off, he plays too loose with the football and is a turnover waiting to happen. He had a pick and a fumble returned for a score against ‘Bama.

With four ranked league opponents still on the schedule, Kelly can make it back to No. 1. It will be fascinating to see how he finishes the campaign.

Purely in terms of passer efficiency, Knight is only ninth in the SEC right now with a rating of 122.

However, Texas A&M has gone from unranked to No. 10 in the AP Poll, with Knight’s steadying influence at the game’s most important position a big reason. He’s calmly steering the ship for an offense averaging 42.3 points per game.

The running game is improved. The receiving corps is loaded. Knight is playing conductor and making beautiful music.