Anthony Richardson didn’t see any action at quarterback in Florida’s overtime loss at Mizzou on Saturday.

Coach Dan Mullen claimed Richardson was “banged up” in practice this week, which is why he didn’t play in the 24-23 loss to the Tigers.

But, it seems Richardson might have a problem with that assessment. As Florida insider Zach Goodall noted on Saturday night, Richardson has removed all mentions of the Gators from his Twitter profile:

Anthony Richardson removed all things #Gators from the top of his Twitter profile. pic.twitter.com/FQLVCbycXl

This is a notable development because, as Goodall notes, Richardson had previously had a pic of him in a Florida uniform and a bio that mentioned the university prior to tonight:

Richardson’s previous profile pic was of him in a Gators uniform, and “Quarterback at The University of Florida” was in his bio. https://t.co/obemmV9h5p

For those wondering what the bible verse was that Richardson tweeted, Proverbs 3: 5-6 reads:

“Trust in the Lord with all your heart
and lean not on your own understanding;
in all your ways submit to him,
and he will make your paths straight.”

Richardson has had nothing but nice things to say about the Gators and QB Emory Jones in recent weeks, but it seems as though he has perhaps hit his breaking point in Gainesville.

This will certainly be a situation to monitor moving forward. Will Richardson (and/or Mullen) be on his way out of Gainesville soon?

UPDATE: Richardson has since added “Quarterback at The University of Florida” back to his profile: 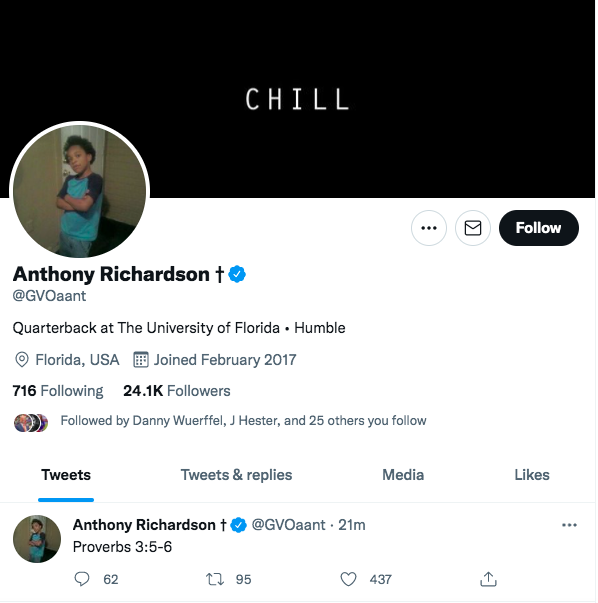