But he’s not that good.

No one is so good that his absence could excuse a performance like the one LSU’s defense turned in during a 44-34 season-opening loss to Mississippi State on Saturday at Tiger Stadium.

The good news for the No. 6 Tigers and Stingley, who was hospitalized Friday night after becoming “acutely ill” in a manner unrelated to COVID-19, is that he’s expected back shortly – perhaps soon enough to play at Vanderbilt next Saturday.

LSU needs him – and it needs to get a lot better on defense.

The only other good news for the defense in its performance was that it “held” the Bulldogs to 9 rushing yards.

That’s largely because there were just 16 attempts (including sacks) as K.J. Costello was passing for the most yards in SEC history (623). Mike Leach is a smart guy. He didn’t see much point in taking the football out of Costello’s right hand except to toss it to an open receiver.

It might be a good idea for the Tigers to put the DBU moniker on ice for a while, because the performance of the LSU defensive backs Saturday was nearly the opposite of what led to the creation of that nickname.

The absence of Stingley, a Freshman All-American last year and an elite defensive back, was significant.

The defensive backs were beaten frequently. On several occasions, they had good positioning but could not locate the ball in time to prevent a completion. They missed a lot of tackles. 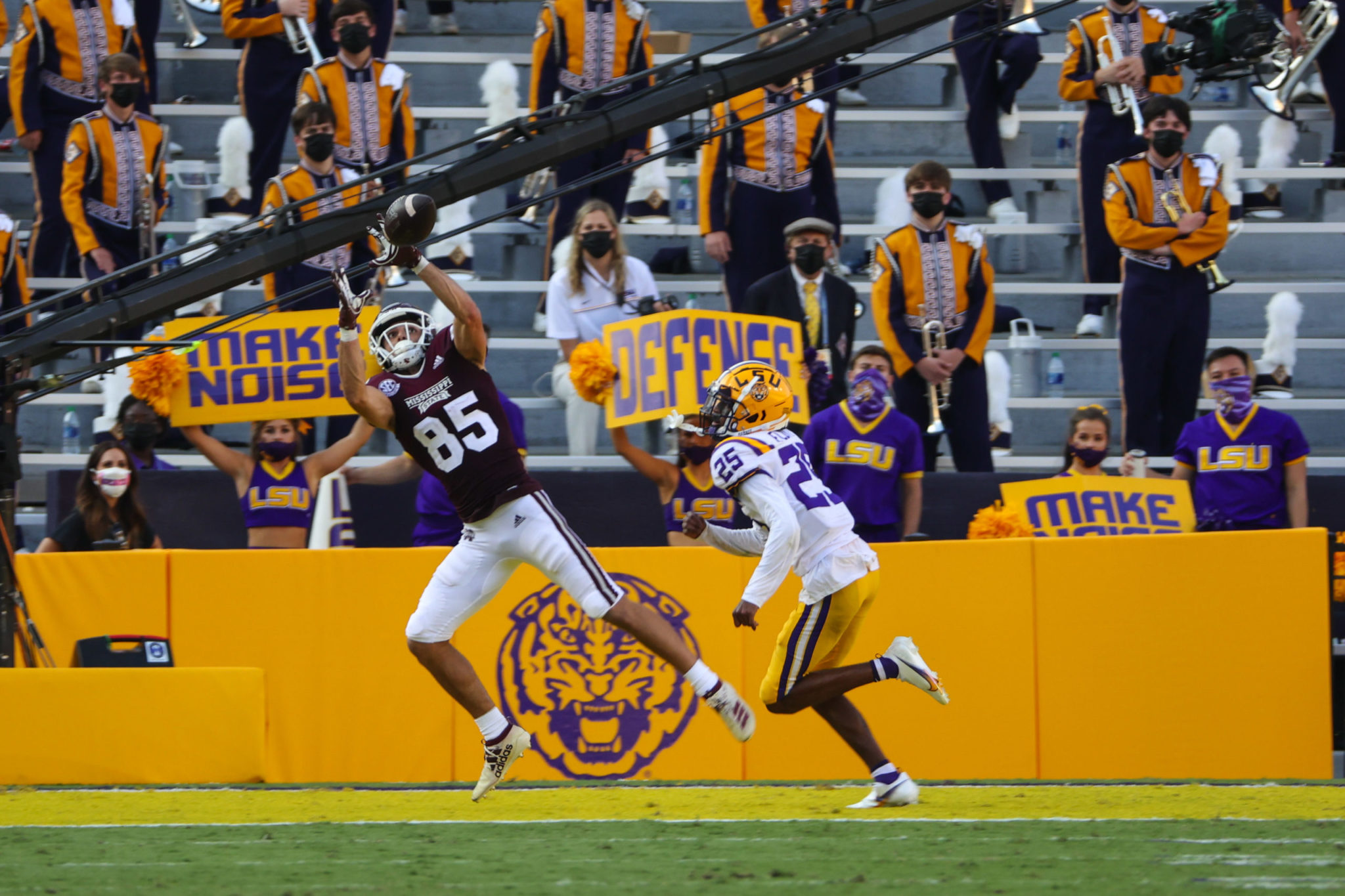 The shortcomings of the secondary are going to stand out the most when a defense allows more passing yards than Joe Burrow had on his best day last season — 130 more, to be exact. But it wasn’t all the defensive backs’ fault.

There wasn’t a consistent pass rush to make their jobs easier.

It was about as bad a matchup as the SEC schedule-makers could have provided for a young, rebuilt defense playing its first game under first-year coordinator Bo Pelini.

Leach was a head coach at Texas Tech and Washington State for a combined 18 years. During that time, his offenses led the country in passing yards 10 times.

Costello is a graduate transfer from Stanford. He has played a lot of games against Power 5 competition. He’s probably the most polished quarterback Leach has had.

The head coach and the quarterback were perfectly suited to take advantage of a green group of defenders, and they did exactly that.

As LSU marched toward its 15-0 record and CFP championship last season, there was periodic hand-wringing and gnashing of teeth over defensive coordinator Dave Aranda and his unit.

There was the down-to-the-wire shootout at Texas in the second game of the season, the essentially harmless but head-scratching 38 points that Vanderbilt scored, the no-lead-was-ever-safe game at Alabama and the recurring second-half breakdowns against Ole Miss.

After that, the Tigers got their act together, and the defense more than held its own during the stretch run to the title.

Aranda moved on to become head coach at Baylor, and Pelini returned for a second stint at LSU, coaching a Tigers defense on Saturday for the first time since January 2008, when another championship earned him a head coaching opportunity at Nebraska.

Pelini is different than Aranda. He operates more out of a four-man than a three-man front. He’s more aggressive. He keeps things simpler. He allows his players to play more instinctively, without having to think as much they did in Aranda’s defense.

His players should be able to play freely, relaxed, with confidence. None of that happened Saturday.

They were mostly one step behind, sloppy, not totally sure of themselves.

Leach and Costello made them look that way.

In Nashville next Saturday, the Commodores’ talent level and scheme won’t be as challenging as State’s. There is a week to figure out what went wrong and how to make it better.

Stingley should be back. That would help.

But just as Stingley’s absence doesn’t explain the terrible opening performance, his presence won’t guarantee a satisfactory one.

Les East
Les East is a New Orleans-based football writer who covers LSU for SaturdayDownSouth.com. Follow him on Twitter @Les_East.