Good morning and happy Thursday! Now that we’ve reached the end of the 2020 season (congratulations to Alabama for winning its sixth title under NIck Saban), we’re going to be cutting back to two newsletters a week. We’ll be in your inbox on Mondays and Thursdays moving forward.

In today’s newsletter, we’ll discuss this year’s Alabama team’s place in history and what this title means for Saban’s legacy. We’ll also dive into the latest round of talks surrounding College Football Playoff expansion. Finally, we’ll take a look at the bizarre budding feud between Auburn and South Carolina. Let’s get started!

Alabama has now won six titles under Nick Saban. What does this latest title do for his legacy? 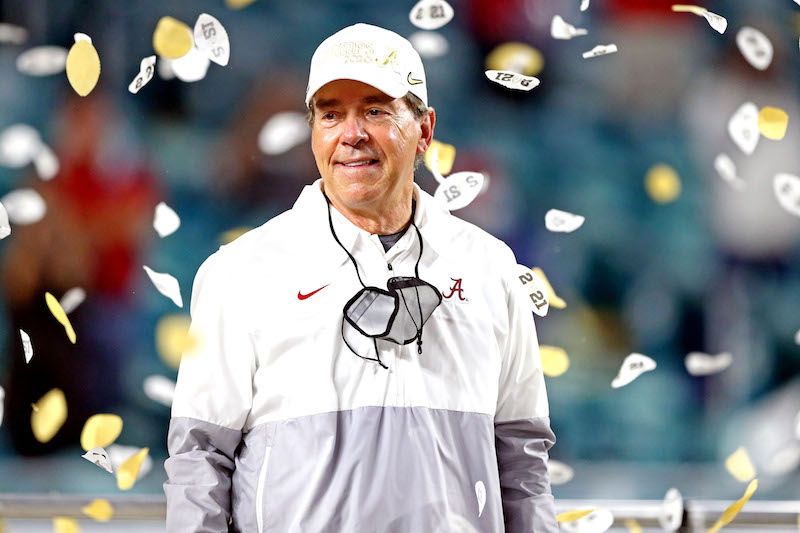 The Alabama Crimson Tide rolled to an easy 52-24 win over Ohio State in the College Football Playoff National Championship Game on Monday night. That marks six titles for the Crimson Tide since Nick Saban took over in 2007, making him the coach with the most football championships in Division I history. Adding in his one title at LSU, he passes the legendary Bear Bryant, who also won six titles at Alabama.

Many analysts and fans already considered Saban the greatest coach of all-time. But, what does this seventh title do for Saban’s legacy? And, was the 2020 team his best ever? Let’s see what’s being said about Saban and the Crimson Tide in the wake of an undefeated season:

How much longer will Saban coach? Does he have an eighth (or even a ninth) title left in him? He has a lot of talent and several assistants to replace before the 2021 campaign kicks off, but if we’ve learned anything over the years, it’s that we should never doubt Saban’s teams!

Now that the 2020 season is over, it’s time to start looking ahead to 2021. Though much is still up in the air amid the COVID-19 pandemic, it is very possible we’ll be seeing more spring football this year. Last year, you’ll recall that many schools had to cancel their spring sessions during the early days of the pandemic.

Ratings are dropping because of the College Football Playoff’s predictability. Is it time to finally expand? 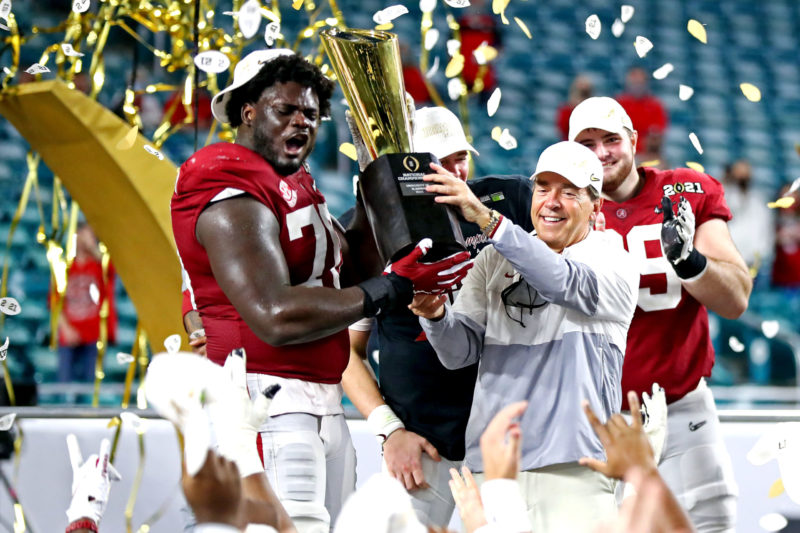 There’s no need to bury the lede, this year’s College Football Playoff left a lot to be desired. Despite all the hype about seeing goliath programs like Alabama, Clemson, Ohio State and Notre Dame in the four-team field, very little about this season’s national title chase proved to interesting.

All three games were determined by 17 points or more and Alabama cruised to a 52-24 victory in the National Championship Game against an Ohio State team that was supposed to be the toughest squad the Crimson Tide faced all year.

Seven years into the College Football Playoff, the format’s predictability paired with the lopsided results have taken a toll on the sports’ viewership ratings. Is it finally time to start seriously considering expansion to address this problem?

Would an expanded field actually fix college football’s problem? Obviously, there’s no guarantee that including eight or even 16 teams would increase the viewership of the College Football Playoff. Allowing more teams to participate in a national championship chase would likely level the playing fields in terms of recruiting. That, alone, would go a long way in eliminating some of the predictability we see in the sport. Maybe we’ll see the College Football Playoff seriously consider expansion after this year, but executive director Bill Hancock has reassured us that, whatever decision is made on the future of the format, money will not be a factor (wink, wink). 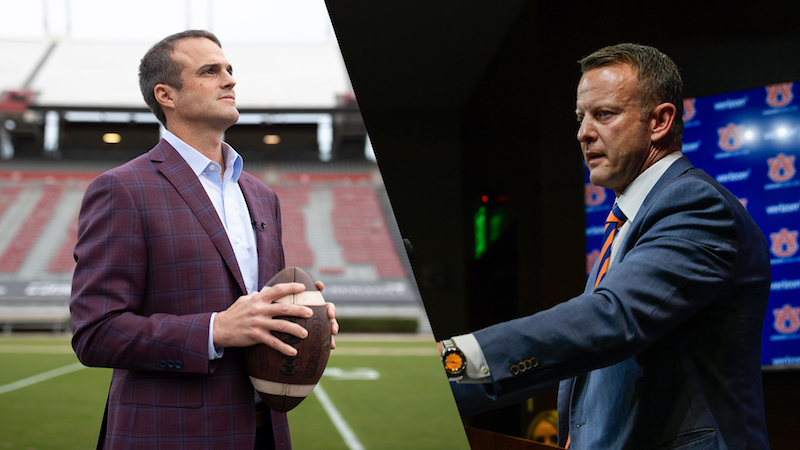 As we prepare to enter the 2021 season, Auburn and South Carolina both have new coaches. Bryan Harsin has taken over for Gus Malzahn on The Plains, while former Steve Spurrier assistant Shane Beamer will lead the Gamecocks into the 2021 campaign. Already, tensions are escalating between the Tigers and Gamecocks, though, and things are only getting weirder.

So, what’s going on between these two schools? Is this a budding SEC East-West rivalry? Let’s take a look at why these two programs have been in the news lately:

There’s still plenty of time before the 2021 season starts. And, now that Beamer has more open spots to fill on his staff, we’ll see if Harsin poaches any additional coaches. Whatever the case, the game between the two schools this coming season should be an intense one.

Here are all the Division I coaches who have won three or more national championships:

Who will be the next coach to join this illustrious group? Clemson’s Dabo Swinney has two titles under his belt, so he could be poised to join the list soon.

“Effortlessly? You didn’t see what they was doing? They was blowing my ass up, what you talking about? It wasn’t effortlessly, I’ll tell you what. They did they thing, bro, to be honest with you.

“What they did is every time we did a play action, they just shot the gaps, shot the gaps. The linebackers, we got a couple of them to play a lot of fakes, that’s why we’re able to throw so much bubbles and slants and all that. But bro, they was blowing my ass out. You trippin’ — it was not easy. I am hurting.”

– Alabama RB Najee Harris took issue with a question in his postgame press conference about how he was able to run “easily” against Ohio State’s defense. Just because he makes it look so easy doesn’t mean it actually is. Ohio State has some quality defenders, but Alabama OC Steve Sarkisian put his players in positions to succeed, and Harris’s strength and determination did the rest. Just don’t tell him it was easy!

Green Bay Packers WR Davante Adams was in awe of DeVonta Smith’s first-half performance in the title game just like the rest of us. He even took to Twitter to say he’d be OK with people misspelling his name “DeVonta” moving forward. High praise from a guy who many consider to be the best receiver in the NFL today.