It’s bold predictions time, but instead of going around the SEC and predicting something crazy, we’ve got to stay in the parameters of one game. Obviously, crazy in this case has to be more specific than just a general outcome prediction. Here are a half-dozen bold predictions for the SEC title game.

Georgia does have an incredibly stout defense, doubtlessly tougher than anything LSU has seen all season. But by the same token, Georgia has feasted off a series of weak offenses. UGA’s SEC schedule pitted the Dawgs against the league’s 14th, 12th, 11th, ninth, sixth, 10th, fourth, and eighth most productive offenses. Of the teams Georgia played, Florida is the one whose passing game most resembles LSU’s, although obviously it’s several notches below that. That game was largely decided by shaky officiating, and UF passed for 257 yards on 33 attempts (with no interceptions). LSU will have 350 or so passing yards on Saturday. 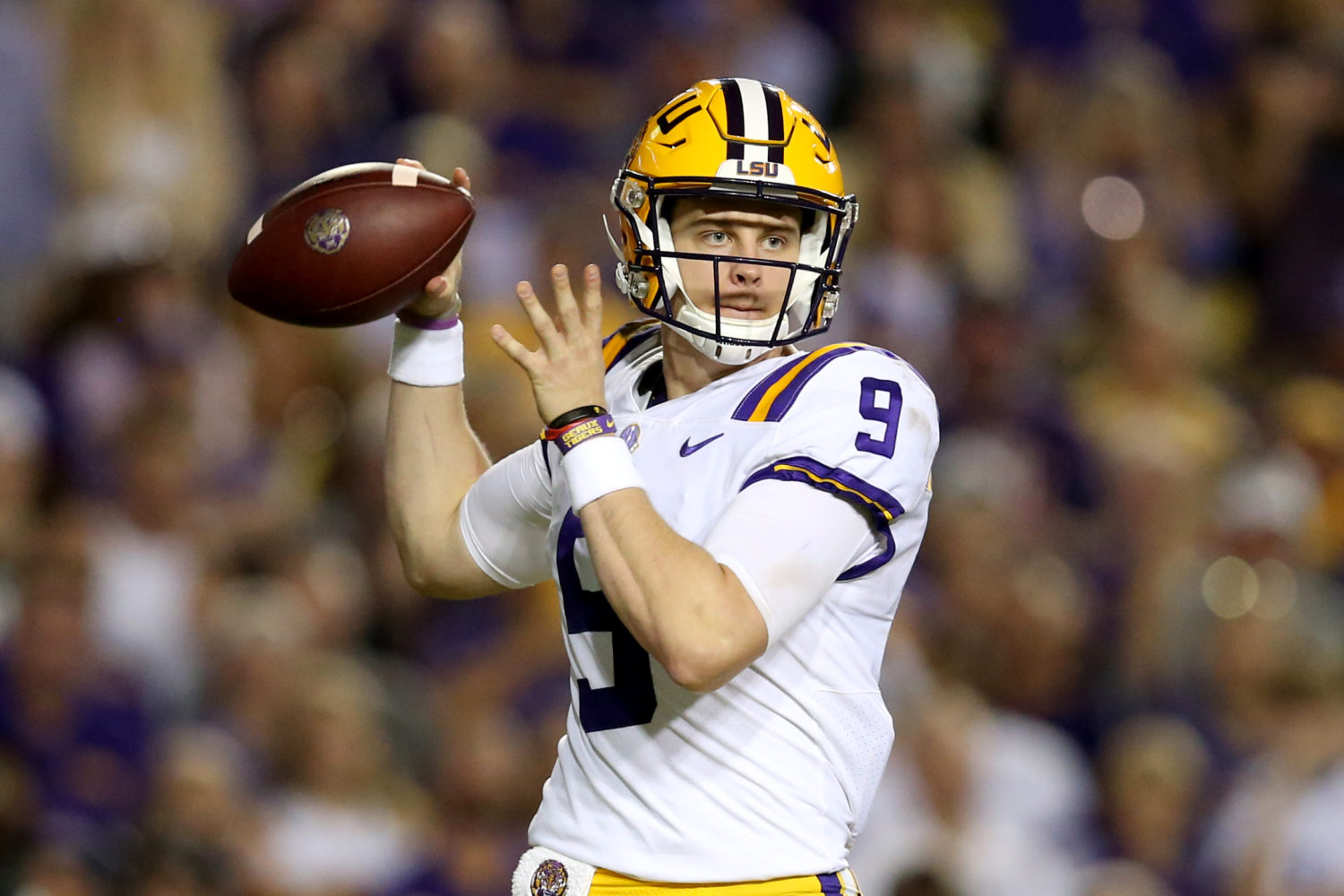 As good as the Georgia defense is, it hasn’t faced the likes of Joe Burrow. Photo by: Chuck Cook-USA TODAY Sports

As good as the UGA defense was, its season was built on playing bad offenses and getting ahead of them early. UGA’s own offense was fifth in the SEC, but some of that was built on playing conservatively and avoiding mistakes. UGA’s 11 turnovers were second only to Alabama (with 10) for the fewest all season. But the scary thing for the Bulldogs is that despite playing with their ears pinned back for most of the year, UGA forced only 13 turnovers, and in the SEC, only Vanderbilt forced fewer. UGA’s one loss was impacted severely by a minus-4 turnover margin. Georgia probably needs to go plus-1 or -2 to have a good shot at LSU, and we can see it doing that. Richard LeCounte has a big play or two at the ready.

3. LSU may struggle in the red zone

Georgia was a solid offensive team in the red zone, scoring on 47 of its 49 red zone possessions this season. Thirty-three of those scores were touchdowns, a rate of 67.3 percent, which is in the upper half of the SEC. While LSU was also very, very good in the red zone (47 touchdowns in 61 red zone visits), the Georgia defense was superb in those situations. Opponents made it to the UGA red zone 21 times but reached the end zone only eight (38.1 percent). LSU, on the other hand, allowed touchdowns in 19 of 32 red zone situations (59.4 percent). If Georgia can trade 7s for LSU’s 3s, that might let the Bulldogs outscore the Tigers.

Georgia will probably stay fairly close to the vest, particularly early given the first-half loss of receiver George Pickens. When UGA has been in tough situations, it has given the ball to Swift. His two highest-carry games this year were the Florida win and the South Carolina loss. Swift has had 20 carries in only three games, but we see 25 for 115 yards as he keeps the Bulldogs in the game. 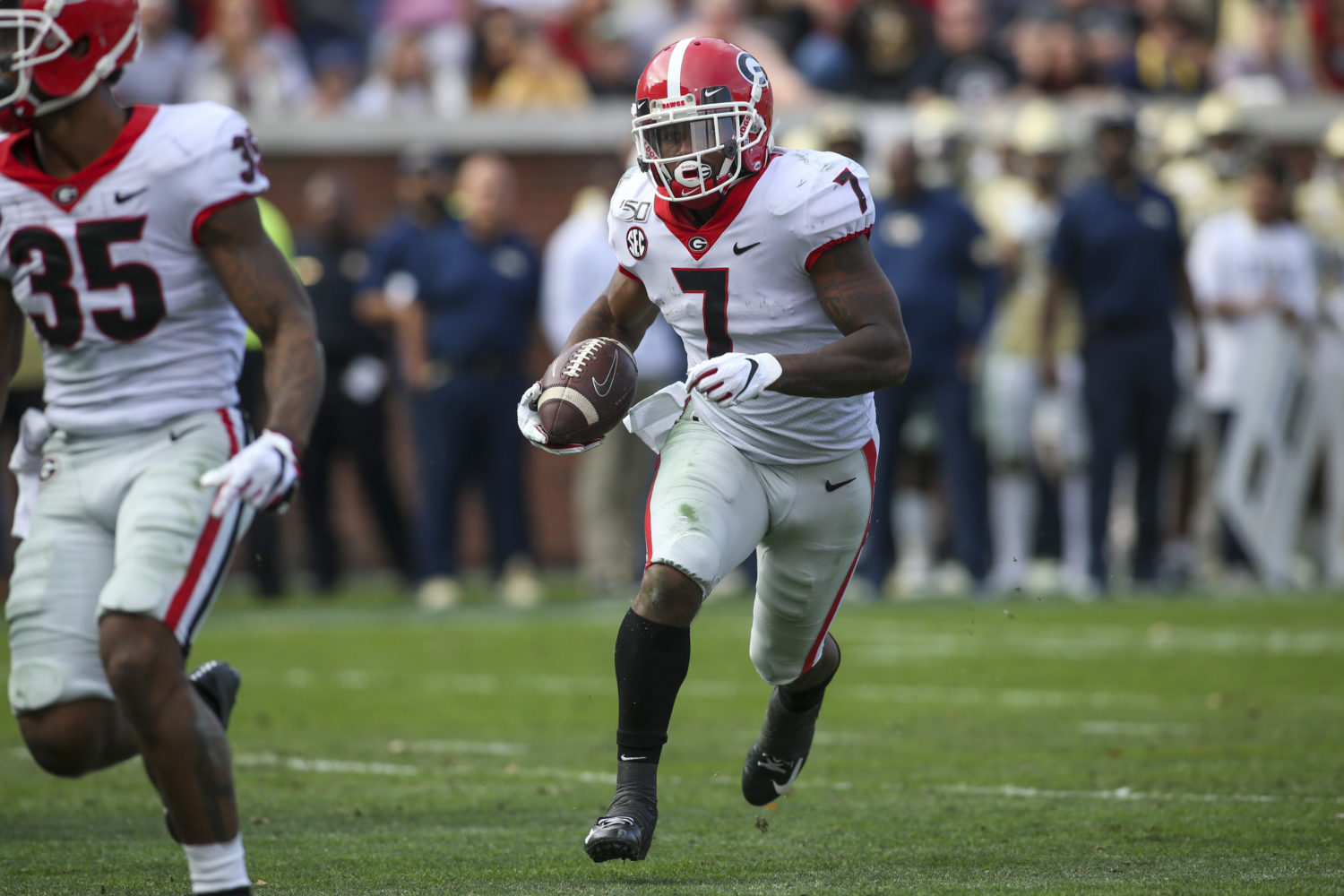 Georgia may need D’Andre Swift to be a workhorse, especially in the first half. Photo by: Brett Davis-USA TODAY Sports

5. Ja’Marr Chase is the standout for LSU

Georgia will do a pretty good job on Justin Jefferson outside, but Chase is all but unstoppable in space. In his past five games (which included Auburn, Alabama and Texas A&M), he has had between 6 and 8 catches and 123 and 227 yards in each game. Yes, Georgia is good. But put Chase down for 7 catches for 150 yards.

6. Georgia leads at the half, but Burrow rallies LSU

Georgia has a little more to play for, it will be focused and it will run its relatively conservative game plan. This will be a high-scoring affair for a Georgia game, but after a couple of early turnovers by LSU and a drive or two ending in field goals, UGA will have a halftime lead. In the fourth quarter, though, Joe Burrow will do Joe Burrow things. He’ll put the exclamation point on his Heisman season and lead LSU to a comeback 31-27 win.

TRENDING
1,271,576 READS
First and 10: The truth hurts, but here it is. Tennessee, you will never be elite again
66,680 READS
Even by SEC standards, the fall of Jeremy Pruitt was stunning
38,742 READS
Prevailing thought after Jeremy Pruitt's firing: It was supposed to be different this time ...
LATEST NEWS
View All
39 minutes ago
Unfinished business: Senior linebacker Hayden Henry announces return to Arkansas for 2021 season
41 minutes ago
Bruce Pearl weighs in on Auburn freshman Sharife Cooper's struggles from 3-point range
1 hour ago
Shane Beamer asked to comment on allegations at Tennessee: 'We're certainly going to do things the right way here'
2 hours ago
SEC announces upcoming basketball game has been postponed
2 hours ago
Tennessee interim coach Kevin Steele reportedly not yet cleared to make assistant coaching hires for the Vols
3 hours ago
Shane Beamer shares details of his first spring practice running the South Carolina program
VIEW MORE